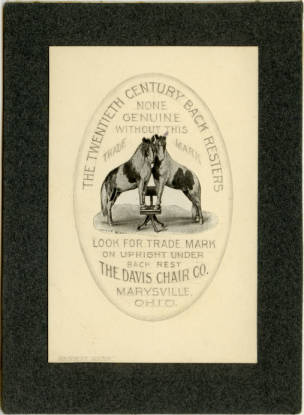 Soldiers of the Great War

This collection contains nearly 30,000 photos of Ohio people, places and events from the 1912 to 1984 issues of the discontinued Columbus newspapers, Columbus Citizen Journal and the Columbus Citizen.

The Davis Chair Company was founded by Charles E. Davis, a music instructor, in 1892 after he patented his idea of the perfect piano chair. By 1898, Mr. Davis sold his interest to S. N. McCloud who created the internationally known trademark of two ponies balancing on the seat of a Davis chair. After a number of changes in proprietorship, the business was discontinued in 1955. The building was located on the northwest corner of Third and Main St, Marysville, Ohio.

History of Union County, Ohio, its People, Industries and Institutions

Written by W.L Curry and Published in Indianapolis, Ind. by B.F. Bowen and Co., 1915. This work contains the history and biographical sketches of representative citizens and genealogical records of many of the old families of Union County, Ohio. The digital collections on this site are protected by US Copyright Laws. If you have any questions about what laws apply to your use of and image please e-mail us before reproducing any images.

The personal collection of Irvin Chamberlin Henry’s memorabilia as a soldier of Company E, 166th Infantry, 42nd (Rainbow) Division was generously donated by his family in 2009. It is currently housed at the Union County Historical Society, Marysville, Ohio. This collection contains numerous photos and newspaper clippings relating to the Union County Soldiers with whom he served; especially poignant is his letter to his parents about the deaths of his fellow comrades. Irvin “Jack” Henry later became the editor of the Marysville Evening Tribune.

This collection contains a selection of Lancaster High School Yearbooks, The Mirage, held by the Fairfield County Library. This is just the beginning so be sure to check back as we add to it. The collection start with the year 1913 and we hope to add all the way to 1965.

This collection contains various photos from around Union County submitted by the citizens of Union County. There are several unidentified photos included in this collection. If you can identify any of these, please contact the Marysville Public Library at 937.642.1876 x 32

The Soldiers of the Great War – Ohio Section Only

The Soldiers of the Great War, published in a 3 Volume set, is a record of the fallen American soldiers in Europe during World War I. It was compiled by the Soldiers Record Publishing Association and published in 1920. The Ohio Soldiers section is located in Volume II. This volume is currently housed at the Union County Historical Society. The Ohio Soldiers section has been digitized and available for viewing.

The Union County postcard collection contains over 450 postcards of Union County buildings, landmarks, cities and towns, tourist attractions, and other views. Along with these views, the collection also represents aspects of social life in Union County during the past century. Some of the cards were produced privately and are in fact photographs that have been printed onto postcard paper. These were created by individuals for their own small circle of friends and were not mass produced or sold in retail stores. This collection was made possible through the generosity of the Union County Historical Society and Mr. Myron Rausch in lending their collections for digitizing.

This is a pictorial essay of the 1964 VR3 Squadron of the Military Air Transport Service of the U.S. Naval Reserve. The book was photographed, edited and published by squadron member Alan E. Zink.

PhotOhio is a keyword searchable repository of thousands of photos, texts and documents relating to Ohio’s history. From this site you can search or browse the collections of Ohio newspaper photo archives, yearbooks, local historical publications and more.
PhotOhio contains irreplaceable collections of newspaper photo archives; yearbooks; local historical publications and genealogical records; historical and biographical sketches available nowhere else on the Internet.
Original funding in 2000 for PhotOhio was supplied by a Library Services and Technology Act (LSTA) grant and the Grandview Heights Public Library. Project funding has continued with support from Central Library Consortium members and several community organizations.